With this 2017 World Championships in Athletics due to take place in early August in London, Richard Mille has declared a set of special watches for just two of its newest ambassadors, Olympic medallists Mutaz Essa Barshim and Wayde van Niekerk. These new watches are called the Richard Mille RM 67-02 High Jump and RM 67-02 Sprint, for its athletes’ various events.Before we talk about the watches, it’s necessary to talk first about Richard Mille’s newest ambassadors. He won a silver medal at the 2016 Olympics. On the other hand, Wayde van Niekerk hails from South Africa and is the present 400-meter world record holder, world champion, and Olympic winner. He also holds the planet’s best time at the 300-meter. And that’s not all, since he’s also the sole sprinter in history to have run the 100 meters in under 10 seconds, the 200 meters at under 20 minutes, the 300 meters in less than 31 seconds, and the 400 meters in below 44 seconds.Impressive athletes for sure, but surely also striking are the brand new Richard Mille RM 67-02 Sprint and High Jump watches. The RM 67-02 is based on the sooner Richard Mille RM 67-01 (hands-on here) and may be regarded as the sport version. Both RM 67-02 watches have exactly the identical motion as the RM 67-01, but possess different cases that have been designed specifically for the two athletes.

He has left behind the pistes, the circuits, the tennis courts, the golf links and the private jets. In Chantilly, RM was there not for performance but for elegance. Richard Mille is a brand, but he’s also a man, and it was this man who took the decision to sponsor the Chantilly Concours Arts et Elégance at the highest level, from the very beginning.

To say that this was a risky endeavour would be an understatement. With an event held entirely in the open air, without any undercover spaces at all, you have to have unshakeable faith in the benevolence of Mother Nature, who holds the success or failure of the event in the palm of her hand. A few drops of rain, a bit of wind, a scattering of grey clouds, and you’ll lose your audience. Fortunately, with a stroke of luck that borders on the miraculous, the Arts et Elégance de Chantilly once again managed to dodge the weather.

The weather aside, what made the most difference this year can be summed up in a single word: experience. For the fourth edition, Richard Mille, Peter & Associés and the Chantilly town authorities came together as a model of efficient cooperation, one by one dispatching all the glitches that dogged the first few years. Spectators and participants buried their misgivings about the weather, and all turned up as planned. Bugatti, Ferrari, Lamborghini and Maserati rubbed shoulders with Renault and Peugeot, giving spectators the opportunity to daydream while getting up close and personal with the brands they take for granted.

Among the highlights of the Concours were a presentation of Ferrari’s five categories to celebrate the Italian stable’s 70th anniversary, pre- and post-war Alfa Romeos decked out in special livery, a selection of models paying tribute to the Pourtout coachbuilder, the Bugatti 57S, pre-1914 cars and the cars of great musicians. 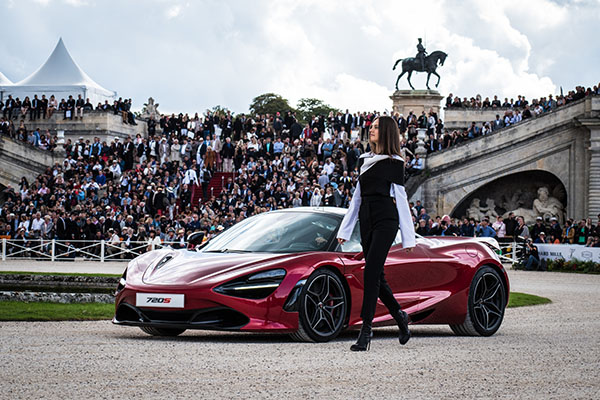 The Concours d’Elégance itself witnessed a number of fine double acts: the Presidential DS 7 Crossback (Eymeric François), Aston Martin Vanquish Zagato Volante (Ann Demeulemeester), McLaren 720S (Memphis Red / Haider Ackermann), Renault Trezor (Balmain) and Citroën CXperience Concept (Yang Li). The spectators were a mix of general public and clients of the partner brands, many of whom were Asian. And that was the greatest triumph of this fourth Concours: to have succeeded in bringing together the business elite with a car-loving public, mixing VIP packages with children’s entertainment, food trucks with Chantilly cream workshops.

For Richard Mille, the event is all about public relations, and will remain so. The watchmaker is one of the last to sponsor this kind of event, following A. Lange & Söhne at the Villa d’Este, Rolex at Pebble Beach and Chopard at the brand-new Swiss Concours in Coppet (with just one event so far). This spectacular gathering also provided the watchmaker with an opportunity to publicise its rude good health: 37 dedicated boutiques around the world, target production (for 2016 and 2017) of 4,000 units, bringing in revenues of up to 260 million euros.